Selenium is a trace element found naturally in the earth’s crust, typically as the selenium oxide compounds selenate or selenite.  These oxides of selenium are water soluble.  Selenium compounds are released from rocks, including coal, as natural or man-induced weathering occurs and can be carried in groundwater and surface water flow.  Selenium compounds are often associated with pyrite and other trace metals.  Selenium in water and accumulations in stream sediments can be ingested by plants, aquatic organisms, and animals where it can bioaccumulate in living tissue to the point of being toxic.  Selenium has been found in numerous case studies to be passed along and bioaccumulate in progressively higher levels of the food chain, potentially impacting large mammals and human health.  As a result of its bioaccumulation potential, it is becoming increasingly recognized that removal of selenium from surface water discharges is important to maintaining environmental quality downstream.

Selenium compounds can be removed from water by physical or chemical processes including chemical precipitation, reverse osmosis, and adsorption.  These methods, however, can be cost-prohibitive and are not always successful.   Another method of removing selenium from water is biological transformation.  This involves changing the oxide forms of selenium to the elemental form, which is non-soluble in water, and which causes selenium to precipitate out of solution.  Microbiological methods of selenium detoxification have been documented in the scientific literature to be both successful and cost-effective.

In anaerobic environments (those devoid of oxygen), bacteria have evolved respiratory mechanisms that utilize compounds other than oxygen to generate energy.  Bacteria have been isolated which can breathe using selenate and selenite as a terminal electron acceptor instead of oxygen.   In anaerobic environments, these bacteria respire selenate, reducing it to selenite, and ultimately to elemental selenium.  Therefore, as a result of the activity of selenate-respiring bacteria, selenate and selenite are converted from water-soluble compounds into non-soluble elemental selenium that precipitates out of the water. 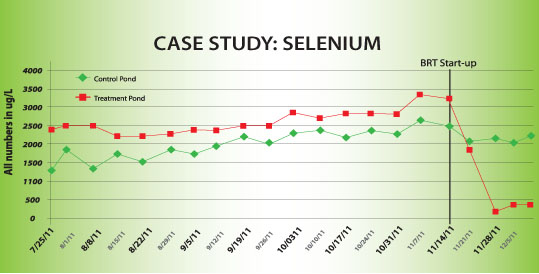