During the second quarter of 2009, BioRemedial took over as the “consultant of record” for remedial activities being performed at a large retail fueling station in Erie, PA owing to the failure of the existing remedial system to achieve attainment of regulatory standards for gasoline compounds in groundwater.

The former consultant installed a vacuum type multi-phase extraction (MPE) system that had been in operation for four years. Total recovery by the MPE system during that time processed over 2.3 million gallons of groundwater and removed less than 3 gallons of hydrocarbons. The MPE system required monthly monitoring and testing of liquid and vapor discharges and payment of a fee to the local municipal wastewater. This expensive system that treated water being discharged still had 7 of 11 monitoring wells that continued to show exceedances BioRemedial of the regulatory standard for gasoline components.

Upon taking over the project, BioRemedial implemented an Enhanced Bioremediation system utilizing the existing extraction points that were being used for the MPE system.  After a couple months of site activities, BioRemedial demonstrated that the MPE system was ineffective and extremely costly. BioRemedial ceased MPE operations and utilized Passive Enhanced Bioremediation as the only form of remediation.  This showed great results by removing the contaminants as well as saving money. This was achieved by eliminating the cost of electricity and maintenance of the MPE system, as well as the cost of monitoring and sampling water and air discharges.

Passive Enhanced Bioremediation performed by BioRemedial consisted of twice monthly injections of highly oxygenated water (≥ 45mg/L of dissolved oxygen) and site-specific nutrients into key well locations.  As of the fourth quarter 2012, groundwater in all monitoring wells was below the strictest regulatory standard in PA for all parameters being tested. The site is currently in attainment sampling. 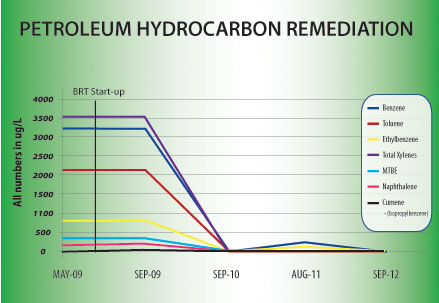